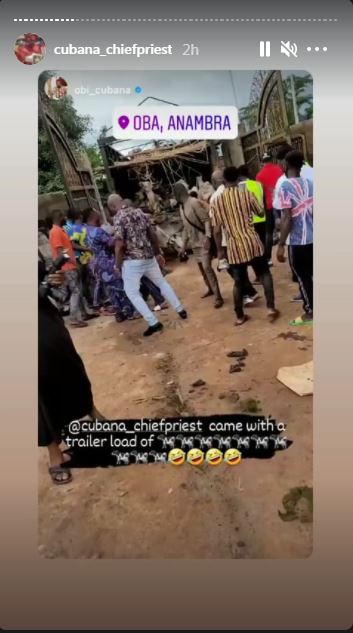 All road leads to Anambra state for the burial ceremony of the year.

Nollywood actor Kanayo O. Kanayo will be among the socialites in Anambra state to celebrate with businessman Obi Cubana, at his late mother’s burial.

In a video that has since gone viral, the movie star is spotted with stacks of cash that will be spent during the burial.

Kanayo O. Kanayo joins the list of celebrities and socialites who have stormed Oba in Anambra state for the much talked about burial.

There have been several viral videos on social media, of friends and associates of Obi Cubana showing off cash they intend to spend at the burial ceremony.

The news of Obi Iyiegbu, popularly known as Obi Cubana’s mother’s burial first made the headlines during the week after his former employee, Cubana High Priest, gifted him with 46 cows for the burial.

As of Thursday, July 15, there were reports that the Abuja-based billionaire businessman had received over 346 cows from close friends and associates.

Obi Cubana is known to be one of the pioneers of nightlife in Abuja where he has major investments in the hospitality business.

See also  Update! Singer, Lyta’s Baby Mama, Free From STD She Claimed She Contracted From Him