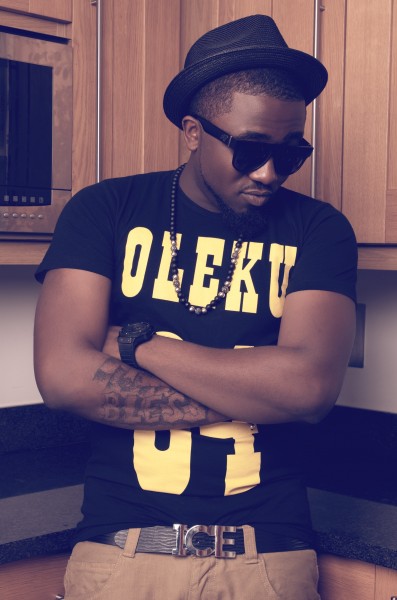 These days, Ice Prince is an OG.

In 2005, two young Lawyers named Audu Maikori and Paul Okeugo started a community of creatives. Poets, writers, rappers, spoken word artists, singers, instrumentalists and more would converge – first in Jos and then – Abuja to showcase their talent. Interestingly, Maikori and Okuego had day jobs that made them start living in different states, but that didn’t stop their passion.

A little while later, they took notice of a fresh US returnee named Migrep. He had a personality, charm, confidence and a way with words and sounds. Everybody liked and appreciated him because he was also kind and courteous. When Maikori heard that he was a clergyman’s son, everything connected. One thing led to another, they decided to enter into a business relationship, which led to ‘Crowd Mentality.’

But Migrep already had some popularity in Jos, where he was bred. His younger brother was also a producer and rapper. Then, there was another artist: a fresh-faced enigma. He looked up to Migrep and his brother with Lagos dreams of becoming a rapper. Migrep would always push him to become a better version of himself, and he constantly sought Migrep’s approval, even till this day.

In 2013, that enigmatic rapper told Bella Naija that, “I think I’m even living more than my dreams. When I started music, my short term plan was to be [Migrep’s] boy, that guy that just follows him. Luckily for me, I’ve been able to create my own lane even off of him, so it doesn’t look like I’m his shadow.”

Interestingly, the first time he met Migrep, he was confident enough to demand a rap battle from the legendary rapper.

Early enough, that Abuja creative community had morphed into a growing record label called Chocolate City and Migrep became Mr. Incredible or MI Abaga. As he rapped on ‘Head of The Family’ off Illegal Music III, he signed to the label without an advance.

But there was another catch; as part of his contract, Abaga was smart enough to negotiate a stake in the business for himself as well as a future imprint under the label. He also brought his younger brother, now known as Jesse Jagz and the other brother, Ice Prince with him.

While the oldest Abaga was hustling to make ends meet in Lagos while squatting in Djinee’s house, his two brothers would shuttle between Lagos and Jos, where they ran Inner Hub, their studio, made for Loopy Records artists like Ruby Gyang, Lindsey Abudei, Eve and themselves to record.

When it was time to move to Lagos, Maikori had certain conditions that all artists agreed to;

See also  SHOCKING!!! I Got Pregnant At 18 After Having Sex For The First Time – BBNaija Jackie B Opens up

All artists agreed to the terms, and a lifetime brotherhood was formed in business and in life. Mr. Incredible went first and he became one of the biggest artists on the continent. Jagz went second and he produced the polarizing, yet underrated Jag Of All Tradez album. While both artists were thriving, Ice Prince worked on his craft with intent, intensity and purpose.

His raps became good enough that he started winning hearts in Lagos.

In 2008, he hosted a Sprite Triple Slam, which had 30 shows across the country. He also won the 2009 Hennessy Artistry Club Tour against a certain Skales. One year later, he released ‘Oleku,’ which became Nigeria’s biggest song of the year. It was also named Song of The Year at the 2011 Headies, where Ice Prince lost the next rated award to a certain Wizkid.

On October 11, 2011, Ice Prince released Everybody Loves Ice Prince, his debut album. The album was a mixed bag of emotions, a certificate from tutelage in Nigerian music, a launchpad to greatness and an unlikely classic, which was initially met with polarizing views. In a way, it was the Made In Lagos of its time: You can criticize it, but you’ll end up appreciating it.

2010 marked the golden era of Nigerian Hip-Hop, punctuated by MI Abaga, Naeto C, DaGrin and Ikechukwu. Rappers like Olamide and Ice Prince were products of what happened between 2006 and 2010 in Nigerian Hip-Hop and it duly reflected in their music. They were a blend of commercially appealing Rap music, and deep-rooted grounding in Hip-Hop.

Alongside Phyno, who dropped around a year later, it’s no surprise that they dominated Nigerian music as superstar rappers. Phyno was the Igbo MC with an attitude, Olamide was the Yoruba king of Lagos while Ice Prince was the alluring English-speaking fashionista, who appealed to all those markets and travelled with the music to other parts of Africa and then the world.

If MI Abaga set the tone, Ice Prince took things to another level. Despite his commercial success, Nigerian Hip-Hop purists received his music with not-so-calm rebuke. They felt like he was damaging the reps of non-utilitatian Hip-Hop. That album was also the start of a half decade-long cyberbullying that Ice Prince suffered.

At some point, #IcePrinceBars was a thing on Twitter NG.

Even before the album dropped, Ice Prince knew about the trolling. On ‘Juju,’ he rapped that, “They say my album worse than a mixtape…”

He also addressed some of his critics on records like ‘Olofofo,’ on which Wizkid did a madness.

After his album dropped, dissenting voices were so loud that he addressed the issue on The Juice with Toolz. They also trolled and questioned the title of his album. Some called it corny while others simply laughed at it for lack of creativity.

On the latter parts of ‘Remember (Intro),’ he had rapped that he didn’t know what ‘Everybody Loves Ice Prince’ meant and that didn’t help matters.

But in 2012, he told Bella Naija that, “What made me give my album that name was when I lost my Mum, really. There was so much love, so much care from all around the world. People really showed me love and it was after that incident that I came back to record my album and I thought what better name to call my album than Everybody Loves Ice Prince because I was shown love.”

In a way, those dissenting voices were not entirely wrong. Some of Ice Prince’s raps were corny. In particular, if you were to pick ‘Oleku’ and read its lyrics, a grounded lover of Rap music might be pissed. The same thing goes for ‘Superstar,’ another one of his smash hits. Even worse, his flow felt rough and slightly off balance on its second verse.

But those that turned him into a superstar.

“Ice Prince is probably the most mentally resilient person I know. I think a lot of it comes from the struggle of losing his parents at a young age,” Jesse Jagz charmingly says. “That’s my brother, man. He became the father of his family and he took on everything with grace. Regardless of anything, he would always take everything with a smile.”

On ‘Juju,’ Ice Prince might have sung that, “If you wish me well, I go wish you well o…” but he ended up wishing everybody well, even his greatest critics.

In 2020, veteran culture journalist, Ayomide Tayo told this writer that, “The best thing about Ice Prince is that he never changed. His attitude to people remained the same, from when he was on Hennessy Artistry till he won a BET Award.”

ELI: The Sound and The Approach

2010/2011 marked the expression of Nigeria’s newly minted Afro-pop sound, which made Hip-Hop sound too serious to be consumed by young minds. Ice Prince’s music was a bridge between both genres; watered down raps, delivered on Pop beats.

In fact, ‘Everybody Loves Ice Prince’ and Superstar by Wizkid are the two biggest beneficiaries of the formation of Nigeria’s contemporary Afro-pop sound, as heralded by True Story by Timaya, Gongo Aso by 9ice, Mushin To Mo’Hits by Wande Coal and The Entertainer by D’Banj.

It’s no coincidence that ‘Everybody Loves Ice Prince’ is a potpourri of genres; Pop, Hip-Hop/Rap, R&B, Reggae/Dancehall and Highlife. At the centre of it all sat Ice Prince, whose understanding of sonics and brilliant way with hooks took centre stage.

The album was an offering to the Nigerian mainstream, tapping into every sound that held significant attention. On one part, records like ‘Oleku,’ ‘Superstar,’ ‘Olofofo,’ and ‘End of Story,’ as produced by hitmakers of that era, Jesse Jagz and Samklef, represented the Africanized version of EDM that Don Jazzy, Jay Sleek and Samklef had introduced with ‘M2M’ by Wande Coal, Unstoppable (International Edition) by 2Face and Reconfigurated by Durella.

Those producers calmly brought Africa to some of their beats with their deft use of snares. If you take the snares out of some of those beats, you would get plain old EDM.

Around that time, Reggae/Dancehall records like ‘Hold You’ by Gyptian had crossover success in Nigeria, just as Shank and General Pype had some exciting runs. Records like ‘Juju,’ ‘Magician,’ ‘That Nigga’ and ‘Wassup Wassup’ followed that path.

‘By This Time’ and ‘Baby’ were birthed off the contemporary Highlife that Flavour, Wizzboy and Duncan Mighty were headlining. Fun fact: Ice Prince also wrote the hook for MI Abaga’s smash hit single, ‘Number One.’

‘See Myself’ was a sonic ode to his Northern roots. Ice Prince also delivered his album in English, Pidgin and Yoruba. Alongside the multilayered sonic approach – in line with MI2: The Movie, the language of E.L.I gave it geographical mileage.

As Jesse Jagz tells Pulse, he produced for Ice Prince more than he produced for himself. Despite producing 11 tracks on the album, he says that they had over 40 tracks to select from.

A lot of people would refer to E.L.I as lyrically bland, but the album was anything but. Ice Prince wore the vulnerability from constant criticism like an armour. A record like the E-Kelly-produced ‘Somebody Lied’ is also as introspective as it gets.

Nonetheless, ‘Small Small’ and ‘That Nigga’ are fillers.

‘Everybody Loves Ice Prince’ was a launchpad for the rapper. After his debut album, he became Nigeria’s biggest rap superstar; possibly the biggest since Eedris Abdulkareem. His fame stretched into a South African fan base, where rappers like A.K.A, Khuli Chana and the late great HHP accepted him into their fold.

He got so close to that part of the continent that he released a tribute to HHP, upon news of the legendary rapper’s death.

Ice Prince didn’t stop there. At some point – albeit for a brief moment, he arguably became the face of ‘Afrobeats to the world,’ post-D’Banj. He had UK fans, which he monetized with certain legendary shows. The father of one also became something of a fashion icon, known for his deft blend of colours and apparel.

The foregoing culminated in his win for Best International Act at the 2013 BET Awards. The win was so big for Nigeria’s Rap community that Olamide used it to diss an unknown artist on K Switch’s ‘For Example (Remix)’ alongside Wizkid.

That win was also the fulfillment of a 2021 prophecy.

During a chat with Bella Naija in 2011, Ice Prince said that, “Now that I’m here, I have bigger dreams. I want to take my music to the world stage but I’m comfortable where I am.”

These days, Ice Prince is an OG. His personality reflects in how he still surrounds himself with young artists like Straffiti and his crew. He’s also signed to 300 Entertainment and word on the streets whispers that the deal raked in some pretty heavy cash.

Is ‘Everybody Loves Ice Prince’ a classic?

The long and short answer is a simple yes.